Smart grids, an evolution of the grid for the energy transition

Home/Industry news/Smart grids, an evolution of the grid for the energy transition

The 21st century is marked by a general awareness about environmental concerns. Facing these challenges, the EU has adopted ambitious targets for its member countries: achieve by 2020 the “3×20” climate plan, namely:
– Increase to 20% the share of renewable energies (RE) in the energy mix
– Reduce by 20% the C02 emissions compared to 1990
– Increase energy efficiency by 20%

This new policy has allowed significant growth in the installation of clean energies(wind, solar …).To follow this development, it is necessary to adapt and modernize the electricity grids. Increased networking infrastructure is needed to better manage the flows generated by the renewable energy production that will be decentralized and bidirectional. And to meet these challenges, the development of expertise in the fields of information and communication, has enabled the emergence of smart grids.

“Smart grids” use new information and communications technologies to optimize all the links of the electrical system, from producers to consumers.

These technologies can be used at all network levels: production, transport, distribution and consumption.

Their main functions are the following:

– real-time measurement, thanks to the sensors installed on site,

– a greater integration of RE into the grid, based on a data system to predict at short and long terms the level of production and consumption,

Already present in many countries of the world, the smart grid market in 2014 accounted for 44.1 billion revenues and expected to nearly double in 2023 to 70.2 billion dollars.

The development of smart grids follows the frantic pace of capacity growth of solar and wind power. Its first goal is to provide better management of intermittent resources and while enabling a higher penetration of this energy type into the electricity mix.

The integration of smart grids on the network 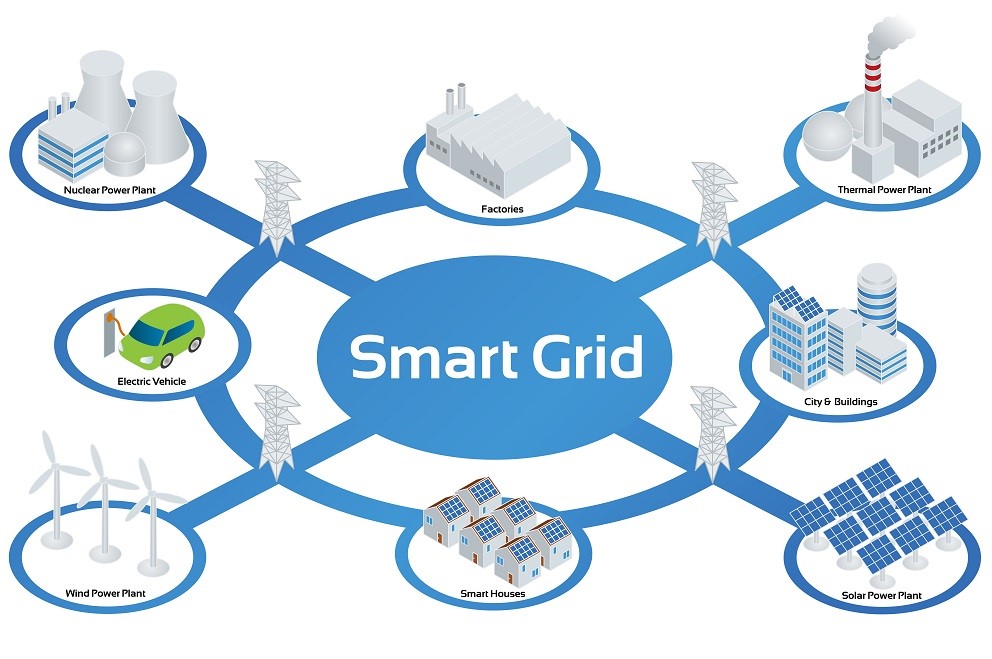 In this complex pattern of smart grid interactions (all the different infrastructures acting within the electrical network), the primary parameter that permits its operation is access to information. And that’s what Reuniwatt offers to all solar stakeholders – data on solar energy in the forms of:

– Real-time data with a single station capable of measuring solar radiation and other meteorological variables, available via the cloud,

– Short-term forecasting of solar radiation and photovoltaic production. The forecasts are available from several minutes to several days in advance through a combination of methods, and are used to optimize the management system: planning the means of production, battery usage, storage optimization…

Reuniwatt’s research implication for the city of tomorrow

The city of tomorrow, or smart city, uses the information and communications technologies to improve the quality of urban services (energy, transport, …) while reducing costs. Smart grids are one of its pillars:

In order to participate in research and development in the smart cities sector, Reuniwatt’s specialist in smart grids, Évariste Chaintreau, joined the IRT SystemX in Palaiseau, where he became a member of the project Smart City Energy Analytics.

The challenge of this project is to develop a modeling tool and decision support for urban actors. This multi-sectors (energy, power, smart building systems, transportation, …) tool will evaluate and plan smart city solutions and their integration into the urban context. The project will also allow the emergence of new intelligence solutions by promoting research and studies on the smart city.

Thus, smart grids are a step in the next evolution of our ways of management and distribution of energy. This ensemble of technologies is already present in the global urban landscape, as in Japan (the cities of Hachinohe, Sendai and Ota City) or in France with the IssyGrid project in the Parisian suburb. And this revolution in the development of RE such as solar, and in technological tools which support it, will continue to expand to become an important pillar of the energy transition.

About the Author: Etienne Buessler

Etienne is a key account manager and solutions manager at Reuniwatt. He joined the team after graduating at Grenoble INP as a Processes for Energy and Environment engineer and specializing in Management, Innovation and Technologies. He studies the energy market apparatus and leads Business Development missions.