How Renewables change the face of a tropical island

Thanks to the government’s strategy and financial incentives, the energy market on Reunion Island is changing rapidly towards a more sustainable future. Today, more than 60% of the island’s homes have solar water heaters installed on their roofs. Since the early 2000’s, public policies have largely incentivized photovoltaic solar energy in Reunion Island, making it a test lab for renewables – on- and off-grid.

Reunion Island wants to achieve 50% of renewable energy in its electricity mix by 2020 and self-sufficiency in 2030. Aiming at 76% of renewable energy sources in 2023, and 81% in 2028, this island in the Indian Ocean is pushing its goal of transforming into a low-carbon economy. Self-sufficient energy supply of the population is a major part of the national multi-annual energy programme, or PPE: the Programme wants to provide 70-80 % of homes with solar-powered hot water by 2030. In addition to the PPE, the region has also set up a promising scheme entitled “La Réunion, solar island and land of innovation”. This plan is constituted of four lines of action, aligned with the PPE and targeting the reduction of the island’s energy consumption through concrete actions and a €160M scheme. This should enable to save up to 318 GWh/year of energy and avoid 240,000 tonnes of greenhouse gas emissions by 2023 while producing a greater part of the electricity from renewable energies.

Already now, Reunion offers the highest number of solar heaters per capita in the EU.
Still, Reunion wants to increase public awareness about environmentally-friendly energy production with a new intensified energy management action plan, plus a cleaner, more efficient and sustainable transportation system, and realize the transition process by using the island’s natural resources through an on optimal deployment of renewable energy sources, and in particular of PV plants.

A test lab for Renewables

Located in the middle of the Indian Ocean and given the elaborated PV policy, Reunion Island is an ideal test lab for the use and combination of diverse energy production facilities.

The largest photovoltaic (PV) power plant in France was inaugurated on the island, on the roof of the SAPRIM, in December 2006. At the time, this 1MWp plant was seven times larger than the largest PV plant in mainland France.
Since 2015, the shopping centre E. Leclerc in Saint-Leu on Reunion Island has been the first installation using a combined PV and storage system on the island. With a capacity of 1MWp PV and lithium-ion batteries, the commercial centre can deal with its peak consumption and make the most of the rooftop PV installation. “Le Portail”, owned by the company Albioma, is one of Reuniwatt’s flagship projects. Our all-sky imager Sky InSight™ helps to forecast production so the control system can be optimized to meet energy consumption and make the most of the generated PV output, while our HourCast™ and DayCast™ forecasting services help with grid stability. 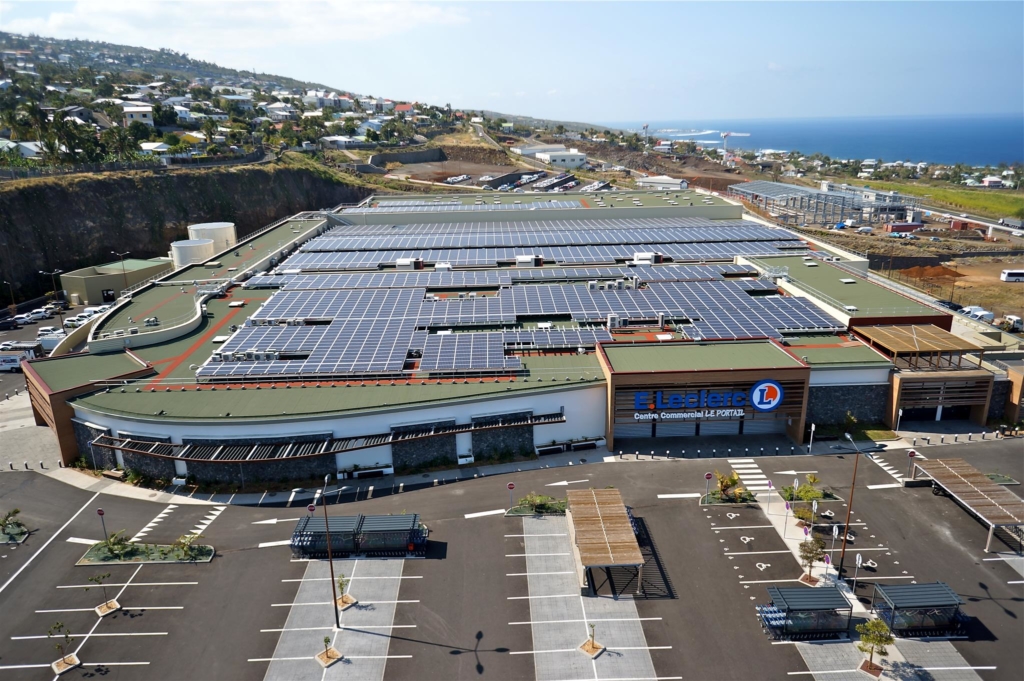 A role-model in the process of change

The island’s energy policy is making huge efforts to become a role-model in sustainability for other remote areas around the world. Innovative companies are at the core of this development.
Reuniwatt’s first patent concerned exclusively photovoltaic installations particularly suited to cyclonic areas – based on Reunion having an average of 10 cyclones hitting the island each season. Consequently, Reuniwatt developed a solution for the massive and secure penetration of photovoltaics into electrical grids. The integration of solar forecasts in the process also leads to an improved storage piloting, reducing the batteries’ cycles and thus increasing their lifespan, while offering a steady feed-in profile.
Today, the work of Reuniwatt and projects such as “Le Portail” show that the energy transformation is possible, and it is only a matter of time until our beautiful island relies solely on renewable technologies.

About Reuniwatt (www.reuniwatt.com)
Reuniwatt is a major player of the solar radiation and cloud cover assessment and forecasting. Based on solid Research and Development works, the company offers reliable products and services intended for professionals of various fields, making the best out of two key facets of the meteorology: atmospheric physics and data sciences. A particular focus has been placed on solar energy forecasting, while developing cutting edge solutions to improve the short-term prediction of the solar resource.
The company has won many grants, including H2020’s SME Phase 1 programme, which makes Reuniwatt a European Champion with regard to innovation.
By Hannah Bergler|December 7th, 2018|Categories: Company News, Industry news|