Reunion Island on the road to energy self-sufficiency by 2030

Reunion Island is facing the challenge of saying goodbye to imported fossil fuels and reaching energy self-sufficiency by 2030, a goal defined in the region’s Multiannual Energy Program (PPE). In 2019, the French Environment and Energy Management Agency ADEME has delivered the latest report on the island’s development and future scenarios, which will allow this plan to become reality.

Renewables on the Rise

In March 2019, Reunion Island’s Regional Council revised and approved the island’s energy strategy, the Multiannual Energy Program (PPE) set up by the Energy Transition Law for Green Growth of August 2015, defining the island’s objectives in terms of energy production and management by 2023 and 2028.
In 2018, renewable energy covered 36.5% of electricity production on the island, 4% more than in 2017, showing that the political commitment is translating into action. Around 20% are attributed to hydropower, and 9% to PV, wind and biogas. While the share of renewable energy production is growing, one question remains: Is it possible to provide 100% renewable electricity in 2030?

How will Reunion’s Energy Mix develop?

In order to research the impact of maximum renewable coverage and enable informed political decisions, ADEME initiated studies into the local energy market, researching the electric power system and different production scenarios, as well as changes in the island’s demographic development, changes in transportation, and energy demand management. Five scenarios show the possible future development of the islands energy mix, including three scenarios that continue to allow energy imports: The “Trend-based” scenario relying on the current trends and developments to continue throughout the next decade, another scenario favourable to conventional energy and a third one favourable to the expansion of renewable sources. Thanks to biomass imports, these scenarios will also lead to the elimination of coal and to a 100% renewable mix. Finally, there are two all-green scenarios aiming at a self-sufficient energy production, one with no energy imports and a renewable energy target of 100% by 2030 (“All Out Green”), and the other even including a switch to electric mobility on the island.

With an expected population growth of 14% and electric power consumption increasing for at least 20% from 2,746 GWh in 2017 to at least 3,313 GWh in 2030, production capacity must be expanded accordingly to cover this need. This will lead to a very strong growth of the installed PV capacity, as PV is cost-effective and low in maintenance. It also can be combined with already existing infrastructure elements, such as rooftops, parkings and alongside roads, which is important on Reunion Island where land pressure is high. Reaching the target of 100% renewable energy will result in up to 80% of the roofs on the island being equipped with PV. Still, the high variability of the solar energy output remains a challenge for energy producers and the transmission/distribution system operator (EDF). Predefined load profiles for solar power plants, as well as short-term solar irradiance forecasts allow for better planning and minimizing the curtailment of available solar energy. Thanks to the strong growth of photovoltaic capacity, it will make up 31% of the energy mix, followed by hydro power (27%) and local biomass (15%). In case of self-sufficiency, PV, wind and hydraulic power stations will additionally need to make up for otherwise imported biomass. Lastly, PV capacity is assumed to double from approximately 700MWp to 1200MWp in case of switching to electric mobility. On Reunion Island, the transport sector is the largest consumer of energy (64.5% in 2018).

The study concluded that local RE potentials are sufficient to ensure a 100% renewable electricity mix while satisfying all of the electricity demand at all times, even with existing constraints, such as national parks, coastal law etc. being maintained. 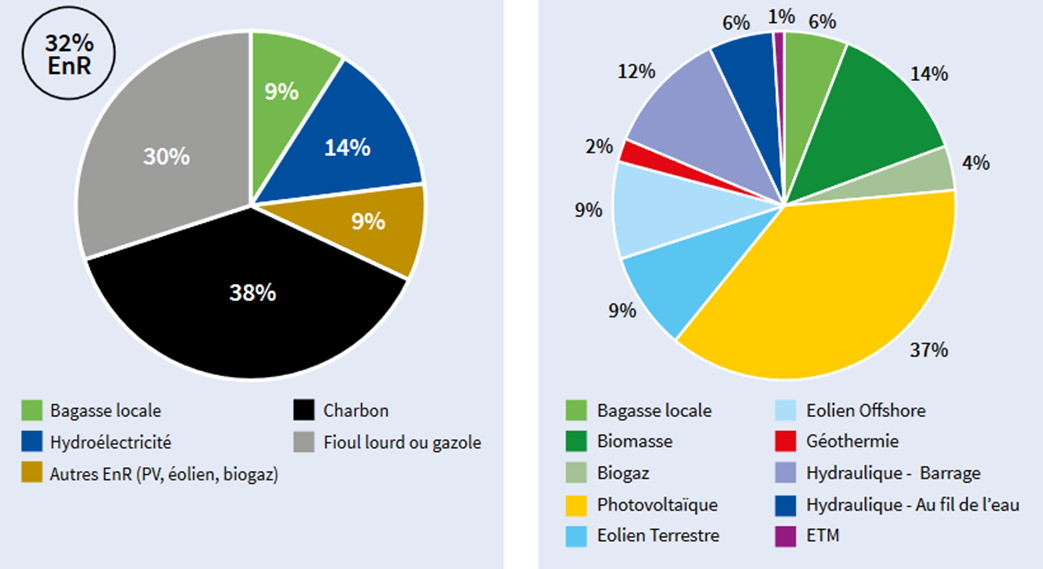 Economic Impact for the Region

The increased share of renewable energy in the energy mix will be ​​accompanied by a drop in the costs of the energy produced (average LCOE). While the LCOE between renewables and conventional generation technologies is converging, local conditions must be taken into account. Fuel imports traditionally make the energy production on an island more expensive, while Solar PV and bagasse offer cost-effective alternatives for Reunion Island. The abundant hydro electric resources have historically been lowering Reunions electricity production costs compared to other NIZs, Martinique and Guadeloupe. Accelerating the pace of renewable energy development and aiming at a self-sufficient energy production from locally available resources therefore makes sense for the island community. The change in the region’s energy policy positively impacts the LCOE of currently €145/MWh. While a tax environment favourable to fossil fuels would reduce related costs, the winner of all scenarios clearly is the “All Out Green” scenario, aiming for 100% renewable electricity, with an LCOE of estimated €123/MWh. A similar effect can be shown for other Non Interconnected Zones (NIZs).

But what would be the impact of an “All Out Green” energy mix on the costs of electricity production over the coming years? Despite the local potential, energy imports currently make up the biggest share of the total cost. Cutting energy imports and realizing the “All Out Green” strategy for self-sufficiency will bring down production costs on the island to €99/MWh, which is a reduction of more than 30% compared to 2015 . Realizing this scenario will require about €2,58 billion of investments, which is a significant amount (+68%) compared the trend-based scenario that doesn’t cut off imports, mostly attributed to new PV and wind park installations. Consequently, CO2 emissions will drop from an average of 627 gCO2/kWh in 2015 (Diesel) or 1323 gCO2/kWh (Coal) to an average of 66 gCO2/kWh for the Trend-based scenario or zero for an autonomous 100% renewable energy system.

One thing all forecasted scenarios have in common: The rise of renewables and the fall of diesel power plants. By 2025, diesel power plants – still more than 200MW installed capacity on the island in 2019 and a staple for remote power stations – will no longer be competitive with renewables and won’t be necessary as a power reserve. Diesel power plants might play a role in the transition phase, but with the expansion of energy storage systems on the island they will become obsolete. Large storage parks, such as a new 5MW battery park in Saint-LEU commissioned by EDF, which is equivalent to the consumption of 8,000 inhabitants, will make up for conventional peak demand production capacity. Sufficient storage capacity is necessary to guarantee the security of electricity supply for each Reunion household and support the ambitions of the PPE in favor of renewable energies. Intra-day storage with Li-Ion batteries will accompany the growing PV share and is one of the technologies essential to the smart grid, reaching an estimated storage capacity of 596MW by 2030, plus another 278MW by electric vehicles alone.

Even if 2030 is considered an ambitious goal, Reunion Island has set a path for sustainable island policies in the Indian Ocean and worldwide. The island has implemented the Observatoire Energie Réunion, which is part of the energy strategy led by the Réunion Region and partners in Energy Governance, observing and providing information on the energy situation on Reunion Island. With all tools at hand for realizing their way towards 100% renewables, Reunion Island is on the best way to realize its local energy transition. The things we never challenge are the things that never change, but change is happening on Reunion Island: It is on the best way to cut off its dependency on fossil fuels.

About Reuniwatt (www.reuniwatt.com)
Reuniwatt is a major player of the solar radiation and cloud cover assessment and forecasting. Based on solid Research and Development works, the company offers reliable products and services intended for professionals of various fields, making the best out of two key facets of the meteorology: atmospheric physics and data sciences. A particular focus has been placed on solar energy forecasting, while developing cutting edge solutions to improve the short-term prediction of the solar resource.
The company has won many grants, including H2020’s SME Phase 1 programme, which makes Reuniwatt a European Champion with regard to innovation.
By Hannah Bergler|January 20th, 2020|Categories: Industry news|