In his Climate Speech on 23 Jan 2020, UN Climate Change Deputy Executive Secretary Ovais Sarmad called 2020 “a critical year for addressing climate change.” In Europe, where tenders and PPAs are expected to push the market for largescale installations in the coming years, self-consumption is an important aspect, and the consumers are ready for the transition to renewables, too: 70% of Europeans surveyed intend to or have already switched to a green energy provider. Renewable energy is a part of almost every climate change strategy – but what effect will climate change have on electricity production from PV?

The Global Risks Report 2020 by the Zurich Insurance Group highlights the failure to adapt to climate change as the most probable risk (only surpassed by extreme weather events) and the risk with the highest impact. In order to get an idea of how climate change could impact solar power in Europe, the most important aspect that needs to be taken into consideration is the power output of PV installations. Of course, there will be other factors influencing the overall demand for solar energy, starting with renewables being the main decarbonization measure on the supply side. On the consumers’ side, climate change might lead to changes in energy demand, e.g. a higher use of air conditioning and less heating due to warmer conditions, and tighter climate policies might result in more efforts to increase energy efficiency over the coming years, which is expected to reduce electricity demand by 10% in 2050.²

So how will climate change affect the energy output of solar panels? PV electricity generation depends on PV cell temperature, the incoming irradiance on the module surface and the respective solar spectrum. Climate change acts as a primary factor on the PV cell temperature through the the direct influence of meteorological conditions, air temperature and surface wind velocity. In addition, it might also influence the incident irradiance and spectrum (changing aerosol composition), as well as the degradation of the module material (higher temperatures) and the occurence of dirt and mechanical damage on the module surface (less precipitation, extreme weather).

It is not sure how the sun’s energy output will vary over the next decades, but it may undergo changes influenced by climate and air pollution levels.
Annual average land temperatures over Europe are projected to continue increasing by more than the global average temperature, with less precipitation in southern Europe. Such effects can be derived from different scenario sets (RCP), or consistent sets of projections, meant to serve as input for climate modeling. 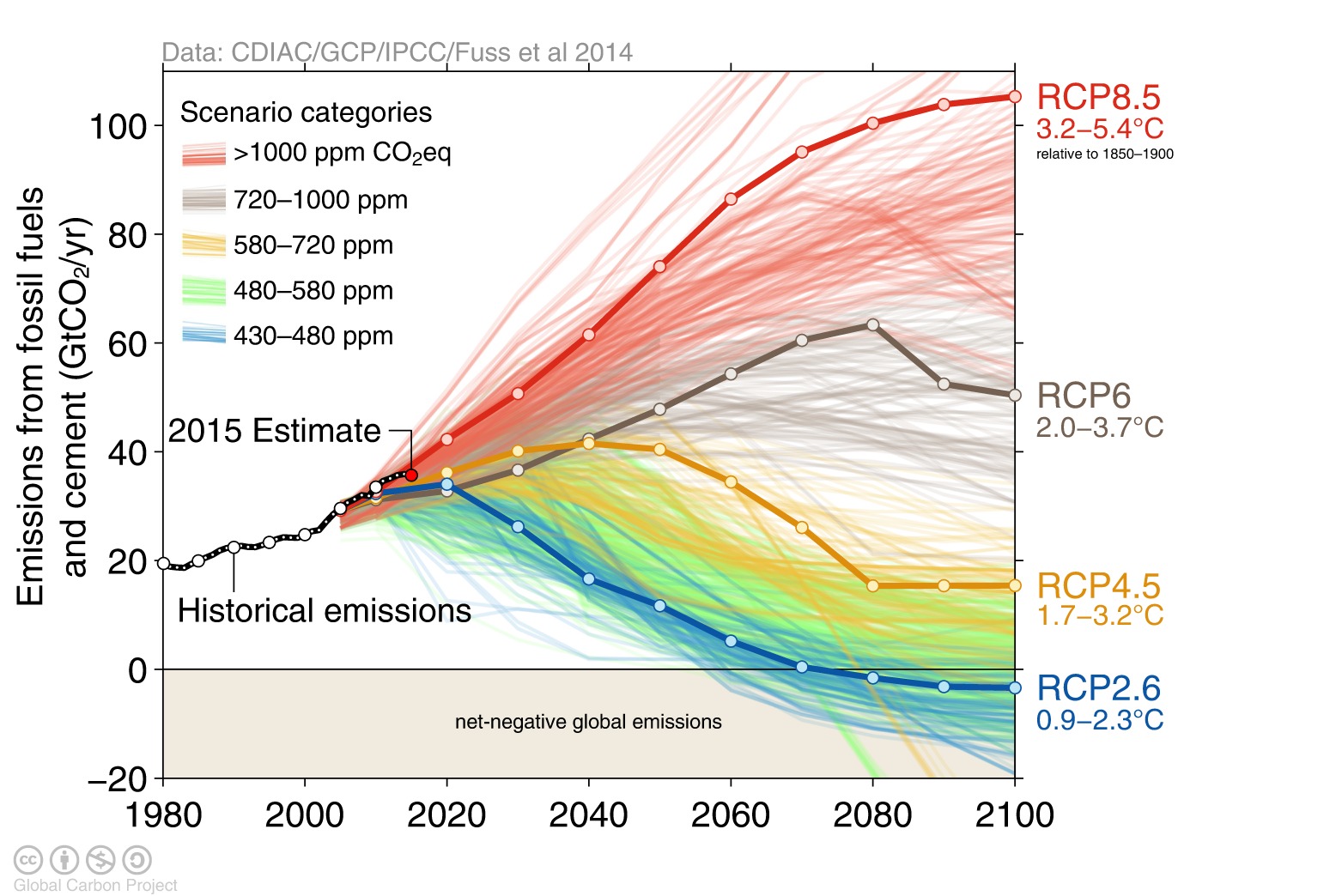 Climate models are numerical representations of various parts of the Earth’s climate system, and models accurately reproducing past and current climates can be used to predict what the climate could do in the future. The full GCM determines large-scale effects, simulating many aspects of the climate system: the incoming radiation, the forming of clouds and precipitation, amongst other aspects. RCM Regional Climate Models (RCMs) increase the resolution of the GCM in a limited area. In 2015, a study analysed the impact of climate change on the european PV supply by the end of the century combining RCMs with a GCM for different emission scenarios.

The group used EURO-CORDEX, a climate change ensemble established for Europe, consisting of different RCMs applied to downscale five different GCMs to a horizontal resolution of 12.5km, and CMIP5, a comprehensive set of global climate projections.
Simulating changes in potential production (PVpot) at the end of the 21st century, including the estimated solar irradiance, air temperatures and surface wind velocities, the results for the ensemble mean showed a slightly negative tendency for Northern Europe, with largest differences in winter and smallest in summer. Results are varying with for each scenario, and GCMs provided a consistently different picture from that of RCMs. Summing up, the tendency was getting more positive moving north to south, with the most positive tendency for southern Europe in summer.

Simulating the RCP8.5 emissions scenario, or so-called “business-as-usual” scenario, the study concluded that largest decreases in would take place in northernmost european countries (up to -14% of PVpot, or −10 W m−2 to −20 W m−2 ), with the power generation and its temporal stability slightly increasing in southern european countries (about 5 W m−2), and little to no positive effects on central european regions. The study found little impacts on mean production values and the temporal stability of the PV power supply in Europe. A second study confirmed these results for RCP 8.5 but concluded that the energy yields of PV systems might be negatively affected in other parts of the world, and positively for Southern China. For France, under RCP 4.5 conditions changes of up to −2%, and under RCP 8.5 conditions up to −3% can be expected. 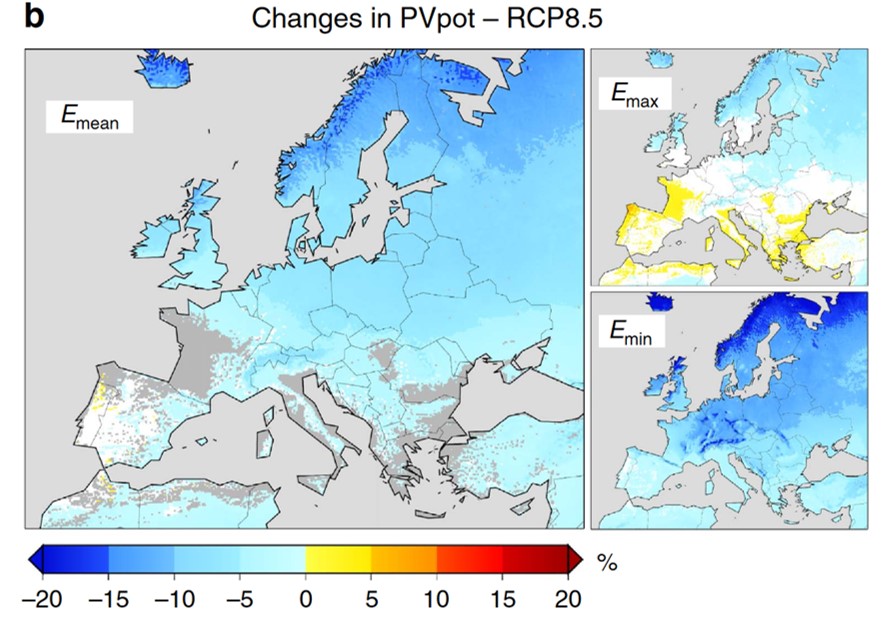 The indirect effects of aerosols (naturals and emissions), changes in land use and the solar spectrum distribution are some of the factors not included. Overall, the results do not imply a significant threat for PV in Europe.

Forecasting is getting more important

With the the growing capacity of renewable energies with a pronounced intermittency, the expansion of the solar prosumer-model, i.e. being producers and consumers of electricity at the same time, and the need for short-term-demand and -supply response in order to increase energy efficiency, there are plenty of reasons for energy businesses to invest into meteorological technology. Reuniwatt’s InstaCast™ is one product which provides ultra high-resolution forecasts of local events, and allows power control to use complementing technologies in an optimized way.

But climate change will bring new challenges for existing algorithms: Extreme weather events, such as heat waves, heavy precipitation and large storms, are considered some of the indicators of changing weather patterns associated with climate change. While numerical weather prediction models of the atmosphere have been continuously improving over the past decades, even nowadays they cannot reliably predict extreme events. Therefore, researchers are currently working on an even better understanding of the development of extreme weather conditions. Future grids with strong on PV penetration will benefit from the advances in forecasting technology.

About Reuniwatt (www.reuniwatt.com)
Reuniwatt is a major player of the solar radiation and cloud cover assessment and forecasting. Based on solid Research and Development works, the company offers reliable products and services intended for professionals of various fields, making the best out of two key facets of the meteorology: atmospheric physics and data sciences. A particular focus has been placed on solar energy forecasting, while developing cutting edge solutions to improve the short-term prediction of the solar resource.
The company has won many grants, including H2020’s SME Phase 1 programme, which makes Reuniwatt a European Champion with regard to innovation. Reuniwatt has also been selected among the national fast-growing companies to join the prestigious French Tech 120 programme in January 2020.
By Hannah Bergler|March 2nd, 2020|Categories: Industry news|