Renewables in France: Reunion Island is taking a lead

Home/Industry news/Renewables in France: Reunion Island is taking a lead

On 17 August 2015, the french government adopted the energy transition act for green growth. Almost five years later, Reunion Island is taking a lead with respect to their installed solar capacity and the country’s energy transition.

Stepping up the game

When France set up its plan for energy transition, it aimed to cut the consumption of fossil fuels by 30% by 2030 and reduce the share of nuclear energy to 50% of electricity production by 2025, while the share of renewables should finally reach 40% of electricity production.
As a concrete measure, the act introduced purchase obligation tariffs to finance renewable electricity produced by and consumed by individuals and businesses.
At the end of 2015, the installed photovoltaic capacity of France had reached 6.5 GW, including 6.2 GW in mainland France.
Since 2015, numerous successful tenders encouraged further PV installations: The Energy ministry launched a series of six tenders of 3GW in total, between 2017 and 2020, which helped increase the PV capacity over the recent years:

Entering the new decade, the installed capacity has almost doubled since 2015, to 9,435 MWp at the end of 2019, with 93% connected to the grid run by Enedis, ELD and EDF-SEI.
The existing solar park equals roughly 51% of the 18.2 GW installed capcity to be reached by 2023 (or 20.2 GW in a second scenario).
In 2019, the regional solar coverage rate exceeded 5% in just two regions in mainland France – Nouvelle-Aquitaine 7.4% (2,455 MW) and Occitanie 6.7% (2,017 MW), followed by Provence-Alpes-Côte d’Azur with 4.6% (1,334 MW), which also posesses the highest density of installations with over 20 KW/km² each. At the same time, the sunny mediterranean island of Corsica achieves 9,5% of solar coverage with just about 152MW of capacity, and 17.5 KW of installed solar capacity per km². In Reunion Island, solar density reaches 75.6kW/km² on the relatively small territory. 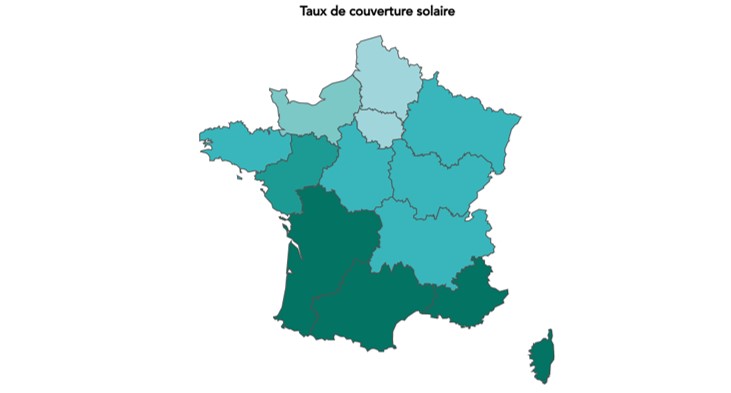 To address the needs the french insular areas Corsica, Réunion, Martinique, Guadeloupe, Guyane, Saint-Barthélemy, Saint-Martin and Saint-Pierre et Miquelon, the French Energy Regulation Commission (CRE) is awarding contracts for these so-called non-interconnected zones (ZNI) for renewables projects over 100kW through regular competitive public tenders.These insular zones, especially the overseas islands, have experienced a dependency on imported fuels for several decades. Reunion Island is the best example on how to overcome this dependency: Since 2002, the local administration is aiming for the autonomy of electricity production with the use of renewable energies (solar, wind, energy from the sea, geothermal energy, hydrogen) and energy management in the long term.

In 2018, renewable energy covered 36.5% of electricity production on Reunion Island, 4% more than in 2017, showing that the political commitment is translating into action. Around 20% are attributed to hydropower – despite the overall production drop of more than 12% in France in the last year, where hydropower made up for 11.2% of the total production – and 9% to PV, wind and biogas. Therefore, Reunion Island is taking a lead in the energy transition of France. The island partly achieves that through (financially) promoting the use of renewable energies on an individual level – through domestic solar water heaters, for example, – as well as planning for the extension of electric mobility in the near future. In addition, the island is embracing and encouraging the build up of local know-how in the field of renewable energy, such as provided by solar forecasting experts at Reuniwatt: The company was recently selected by the FrenchTech 120 initiative as one of the most innovative young companies in France.

The local PPE recognises that for the development of renewable energies it is a necessity to support:

One point in making the local energy transition become reality are investments: With around 515M€ for the period 2019-2023 in comparison to 269M€ from 2016-2018, Reunion Island has planned the yearly budget to increase by 13% for the cause. Also, the production from non-renewable resources should be reduced by just about 45% in the period between 2019-2023, according to the scenario outlined in the PPE. Nevertheless, 2030 is considered an ambitious goal for a 100% renewable energy supply, but Reunion Island has set a path with its sustainable island policies and is taking a lead in France on its way towards a greener growth.

Nevertheless, with the renewables share growing, the naturally varying outputs of the renewable energy sources have a growing impact on the system’s imbalance. PV and wind production are constantly fluctuating and can experience strong variations, as shown in Image 3 for Reunion Island. Ramp events at the level of a remote island can be way more important than for mainland France, because the respective territory is smaller and the island’s tropical climate favours rapid weather changes.On the island, solar variability is high – the output of PV can be reduced by over 60% in one hour, while in France mainland a cloud event would take more time to cover the large parts of the surface.
As a consequence, improvements of the PV & wind production intraday forecasting and nowcasting (real time) tools are essential for a cost effective and secure management of the strategic reserve, which is why Reunion Island is expanding its battery storage and, in combination with forecasting, can safely handle production lows caused by irradiance drops, as well as peak load hours. 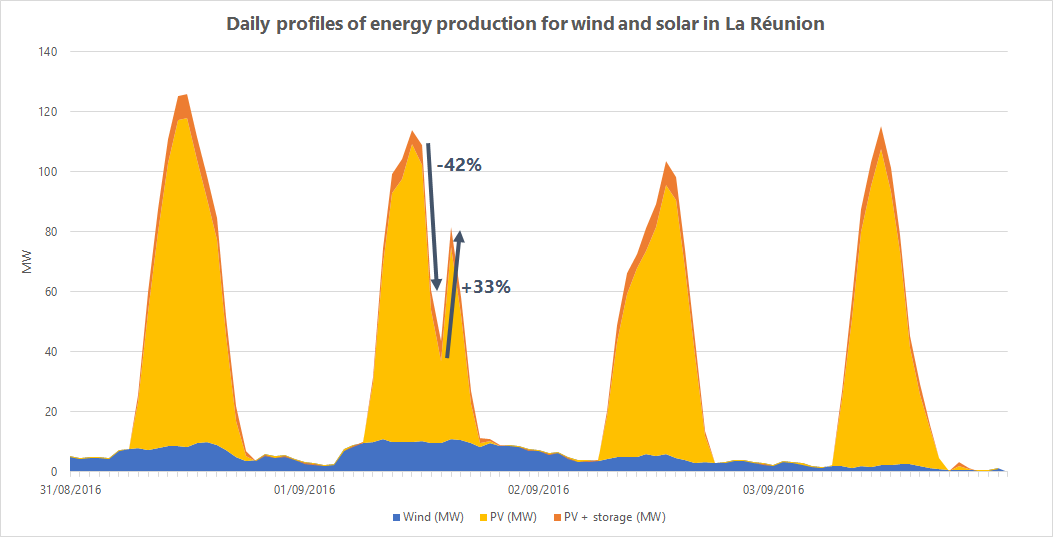 The base for further actions is the latest Multiannual Energy Program (PPE) from january 2019, which sets priorities for the next decade: To increase the installed capacity of renewable energy by more than 70% compared to 2014.
During 2019, the french parliament and government took further steps and structuring measures for energy and climate related issues through the adoption of the Energy-Climate Law in september 2019: France is stepping up the game.
Amongst other things, the act gives credit to the ecological and climatic emergency, and its decisions have been integrated into the National Low-Carbon Strategy (SNBC) and PPE projects. Among the objectives and measures of the law are

The law provides a base for reducing the country’s dependence on nuclear power, and the measures outlined are being reviewed every five years. A new plan will set the main energy objectives in terms of renewable energies, energy consumption, fossil fuel output from 2023. But what has been achieved at the beginning of the new decade?
Nuclear Power is still making up 70.6% percent of the total production, but wind and solar power are continuously increasing their share: 6.3% of wind power (+21.2% in the past year) and 2.2% of solar power (+7.8%), compared to 8.6% of PV in Reunion Island in 2018. In 2019, renewables made up more than 20% of the total production.

But France is profiting from this development as planned by the Multi-Year Energy Programming (PPE) also in another way: The added value created by renewable energies will increase by 52% between 2019 and 2028 in France, reaching 21 billion euros annually. This result represents 10% of the total added value created by the industrial sector in 2018, thus placing renewable energies already now among the industrial sectors that generate the most value in France. There’s more than one good reason for France to boost renewable energies and continue adding new solar capcity in the 2020s.

About Reuniwatt (www.reuniwatt.com)
Reuniwatt is a major player of the solar radiation and cloud cover assessment and forecasting. Based on solid Research and Development works, the company offers reliable products and services intended for professionals of various fields, making the best out of two key facets of the meteorology: atmospheric physics and data sciences. A particular focus has been placed on solar energy forecasting, while developing cutting edge solutions to improve the short-term prediction of the solar resource.
The company has won many grants, including H2020’s SME Phase 1 programme, which makes Reuniwatt a European Champion with regard to innovation. Reuniwatt has also been selected among the national fast-growing companies to join the prestigious French Tech 120 programme in January 2020.
By Hannah Bergler|February 24th, 2020|Categories: Industry news|